Posted on 21 November 2014 by insidethecages 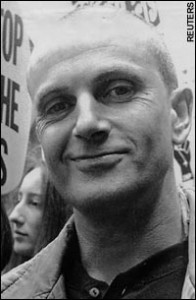 “As with other hunger strikers throughout history, Barry laid down his life to correct an injustice. For other martyrs, it had been to end oppression of people because of their race, gender, political or religious beliefs; for Barry, it was a stand on behalf of non-human animals whose suffering is sanctioned by lawmakers, politicians, religious leaders and certain philosophers.” – Mel Broughton

“Barry’s closet and dearest friends, the ones he was totally at ease with, were his mates who’d all be involved in direct actions. It was a closed circle of men who cared passionately about cruelty inflicted on the vunerable and beautiful creatures on the earth. They were prepared to risk their freedom to fight a vicious and obscene system, which to this very day still exists in the annals of the Home Office and the callous, uncaring people who represent the government.” – Nancy Phipps

This entry was posted in Animal Liberation, Barry Horne. Bookmark the permalink.